Welcome to the return of TeraSaturday, a not-so-weekly update post about all the neat stuff that has been going on in the world of Terasology! Half blog, half changelog, completely cool.

For years, the Core module of Terasology contained everything needed for some simple gameplay. Basic world generators, the inventory system, grass and stone and trees and chests and all that fun stuff. Even dynamite! There was a bit of a problem, though, in that not every game mode needs all those things. They might use a completely different world generator, or have a different inventory system, or they don’t want to have players blowing things up. So about a year and a half ago, we began mining out the Core.

Jellysnake separated Inventory from Core, and Adrijaned pulled out Biomes. Health got its own fresh new module thanks to e-aakash. I pulled out all the world blocks, creating the CoreBlocks module, and CoreAssets for the textures and sounds they used. That was a big project, requiring updates to over 50 different modules!

Taking the extraction to its logical conclusion, Skaldarnar and Niruandaleth have completely removed the Core module. CoreBlocks has been blown up, too. In their place, a new network of modules stretches across the workspace, each providing a specific subset of functionality for the Core Gameplay preset. 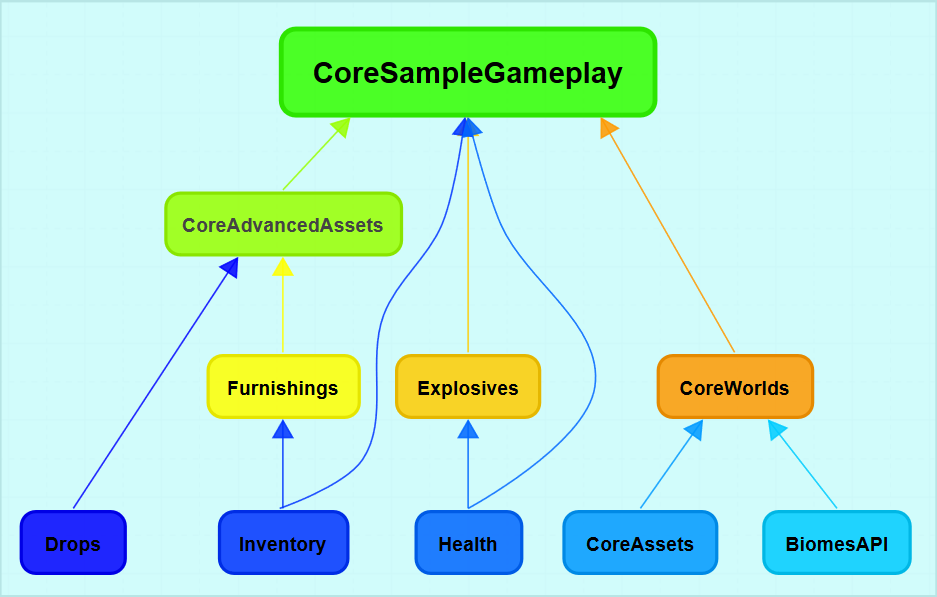 The old Inventory and LootPools modules, used to keep track of items, have been mixed together and separated again, forming a refreshed Inventory module and a new Drops module.

CoreBlocks has been divided and conquered. Basic blocks like dirt, stone, sand, and wood have gone directly into CoreAssets, while fancy blocks like chests and doors and TNT have gone into CoreAdvancedAssets. (Yes, the name is still a work in progress.)

The new modules of Furnishings and Explosives hold the game logic that those fancy blocks need to work, so other modules can make their own storage, doors, or bombs without needing to keep the basic versions around too. All the world-builders have been moved to the aptly-named CoreWorlds. All together, CoreSampleGameplay combines this new collection of modules into the same base gameplay setting that existed before.

If you’re just playing the game, you probably won’t notice much of a difference before and after. But for module developers, it opens a lot of doors (and chests!) for making more cool stuff, more efficiently.